Schrebera alata, or the Wild Jasmine is a member of the Oleaceae, or olive family. In 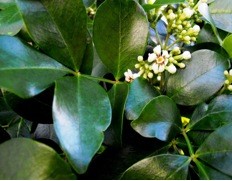 Zimbabwe, the olive family comprises of the two Schrebera species: S. alata (along the Great Dyke) and S.trihoclada (in the Zambezi Valley). The most common member of the Oleaceae is Olea europea which grows profusely in the Bulawayo area. The other common names for the tree are the Wing-leaved Wooden Pear, Mutizi (Shona), Umbazankezo and Umnatazule (Ndebele).

The tree was named after Johann Cristian Daniel von Schreber, a German naturalist (1739-1810), while the specific name ‘alata’ means with wings, referring to the winged seeds. Schrebera alata is a lovely small evergreen tree, fast-growing and reaching between 4 and 15m in height. The bark is a light-brown to grey. The leaves are compound and imparipinnate; they have two pairs of opposite leaves plus the terminal one. The petiole and rachis are winged. The whole leaf is shiny above and duller underneath. 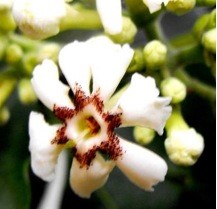 The flowers are white flushed with pink. They have a long corolla tube with five spreading lobes, around one and a half centimetres long. The flowers are sweetly scented and bloom from September to May.

The fruit, which is available March to July is a light-brown, woody pear-shaped capsule that splits into two halves to release eight winged seeds. The wood is pinkish-brown and works to a fine lustrous polish, but is susceptible to borers. Nevertheless, this wood has been used for furniture and various other uses but as a rare species, it is not readily available.

While the tree does not appear to have any medicinal properties,there is a spittle bug, Ptyelus grossus of the Cercopidae family that favours its sap. In its larval and nymph stages, the bug produces a foam nest around the whole colony. The foam is excreted in large quantities, causing so-called ‘rain’ effect under the tree. The adult spittle bugs have slate grey wings, each wing with two white and yellow patches near the outer margin. The head is white, rounded, with large dark eyes and small black and yellow marks on the forehead. 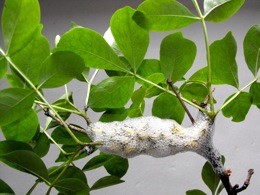 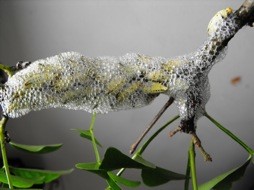 Schrebera alata is not the most famous host of Ptyelus grossus, the best known ‘rain tree’ is Philenoptera violaceae (formerly Lonchocarpus capassa). In Harare the most common ‘rain tree’ is the Tipuana tipu, those large, graceful trees that line Falmouth Road in Alexandra Park. This is an exotic Pterocarpus species from South America. Tipuana tipu is now considered an environmental weed due to its ability to reproduce so effectively that it can outcompete and reduce the local biodiversity.

Goldsmith, B. and Carter, D.T. 1992. The Indigenous Timbers of Zimbabwe. Forestry Commission, Harare.