The generic name Bolusanthus honours Harry Bolus (1834 to 1911) who was a South African botanist and the founder of the Cape Town Bolus Herbarium at UCT. The specific name speciosus means beautiful or showy in Latin. Other common names are mukwashanyama (S) and impaca (N).

This is my favourite of all indigenous trees. It is a highly decorative tree, of only around four to seven metres in height. It is naturally widespread in wooded grasslands at medium and low altitudes in Southern Africa, ranging from Angola and Zambia down to KwaZulu Natal. It is a graceful tree that makes an excellent garden subject and, in the right sunny spot with well-drained soil, grows well in Harare. It can also be grown in a container and looks spectacular on any sunny patio.

The Tree Wisteria is the only species in the genus Bolusanthus (monospecific) and is a protected species in South Africa. The multi-stemmed tree is briefly deciduous, dropping its leaves for only a short time in early spring. The trunk is eye-catching – blackish brown, rough, and deeply longitudinally fissured – and 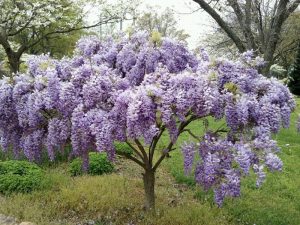 the delicate, shiny green compound leaves are suspended from drooping branches. The leaflets have a conspicuous pale yellowish midrib and a narrow, tapering point. The pea-shaped flowers (typical of the Papillionoideae) are a striking bluish-mauve that grow in drooping, loose terminal sprays that often cover the whole tree. They appear in spring (August to October) but can extend into November and December, even into January in some years. Flowers are followed by brown pods, typical of legumes, which are papery and may be indehiscent or only split open in February or March. 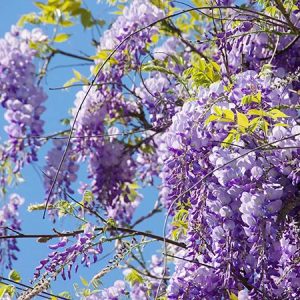 The straight stems are hard and termite resistant, and so can be used for fence posts. The wood is one of the best and hardest of indigenous timbers, which makes it sought-after by carpenters and, although usually making only small wood, has a wide variety of uses including furniture and lampshades, as well as bowls and other articles produced on the lathe. The roots are used medicinally to alleviate stomach problems and the inner bark used to treat abdominal cramps. Animals including monkeys, gemsbok, giraffe, and grey duiker eat the pods and leaves.