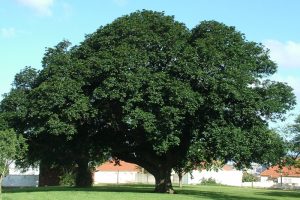 A number of mahoganies exist. However, unique in its beauty is the Trichilia emetica which is commonly known as Cape Mahogany (Mutsikiri-shona and Umkhuhlu-Ndebele). It is an evergreen tree with glossy dark green leaves.  It is found in Southern Africa, mainly distributed in the eastern parts of South Africa, Mozambique, Zimbabwe and northwards throughout the rest of Africa. It occurs naturally in riverside forests and areas with rich alluvial soils. 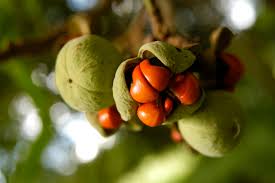 Cape mahogany is a fast grower and it can be planted throughout the year. It is able to tolerate moderate winter drought and slight frost. Propagation from seeds and cuttings is possible and the tree can grow up to two metres in a year. Harvesting of the fruits is done from January to May. The rounded furry fruit splits into three or four parts when dry. Each fruit bears three to six shiny black seeds which are almost completely covered with an orange-red aril.

Oil from the seeds of the Trichilia Tree forms a solid butter at room temperature and melts at 30˚C. The butter, often called 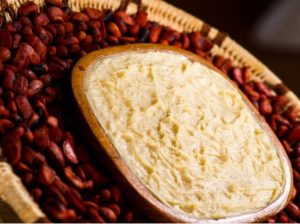 Mafura Butter is rich in essential fatty acids (palmitic, stearic, oleic and linoleic) and has been shown to have antimicrobial and anti-inflammatory activity due to the presence of limonids such as Trichilin A.

Remarkable uses of Cape Mahogany exist. Seed oil is edible hence it can be used for cooking. The seeds can be soaked in water and the milky substance that remains is used to make porridge. A central part of Southern African domestic life is the seed oil butter which is used for its cosmetic and healing properties. It can be applied topically onto the skin to nourish and revitalise as well as to condition the hair. The butter is also used medicinally to heal wounds, while the wood is used for carvings, furniture and canoes. The fresh fruit is usually eaten by animals such as antelopes. The tree has been widely planted as a street or garden tree to provide shade and it is ideal for car-parking areas.

The market is relatively niche and generally of higher value. There are avenues for growing Zimbabwean demand for Mafura Butter mainly by improving awareness. Kaza, a Zimbabwean company specialises in natural oil products for skin and hair including mafura butter. 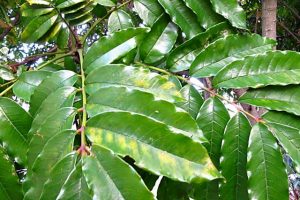 For more information and products check www.bio-innovation.org or www.kazanaturaloils.com or visit us at our office (48 Harvey Brown, Milton Park) or Maasdorp and Amanzi markets.