The Coral Vine holds via tendrils and is able to reach 25 feet or more in length. It has heart shaped, sometimes triangular leaves and is heat and drought tolerant when it is well established. This species is a perennial and forms underground tubers and large rootstocks. The former will resprout if the plant is cut back or damaged by frost.

The flower clusters (4-20cm long) have hairy stalks and the flowers are arranged into small groups along the branches. Individual flowers are borne on smaller stalks which are 3-10mm long and each flower has five ‘petals’. The latter are usually bright pink in colour, but can occasionally be white or reddish and slowly turn dull pink and eventually brown.These flowers are very attractive to bees and butterflies. 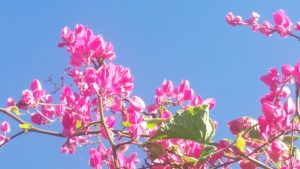 Antigonon leptopus is a smothering vine that invades disturbed areas and forest edges, quickly covering nearby plants and structures. Its rapid growth has led to it being declared an invasive species in South Africa in the provinces of KwaZulu-Natal, Mpumalanga and Limpopo.  It is native to Mexico and is often grown as a landscape plant. Coral Vine is grown in the landscape as an ornamental, typically used for its vining habit to cover fences or climb trellises. It tolerates poor soil and a wide range of light conditions, making it a very successful “cover up” plant.

There are many methods of reproduction and dispersal that aid in the survival of Coral Vine. It is also a prolific seed producer, and its seeds are buoyant thus enabling the plant to disperse to new locations via water channels. It can also spread to new locations through the domestic and wild animals that eat the fruit. Pieces of its trailing stems may be broken off and carried about during earthmoving operations and by floodwaters.

Tasks to do in April

January In Your Garden