The average distance from Earth to our Sun is about 150 million kilometres and that distance is called an Astronomical Unit (AU).  This is the unit used for measuring distances within the Solar System e.g. Jupiter is 5.2 AUs from the Sun.

A near-Earth object (NEO) is any small Solar System body whose orbit can bring it to within 1.3 AUs of the Sun.  However, if an object crosses Earth’s orbit and is larger than 140 metres across then it is considered to be a potentially hazardous object (PHO). Most known PHOs and NEOs are asteroids. 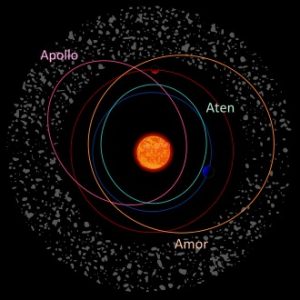 Known NEOs include more than seventeen thousand asteroids, more than one hundred Comets and a number of solar-orbiting meteoroids.  Strangely enough, man-made spacecraft are also termed NEOs! All these objects are large enough to be tracked in space before striking the Earth. It is now widely accepted that collisions in the past have had a significant role in shaping the geological and biological history of the Earth. NEOs have become of increased interest since the 1980s because of increased awareness of the potential danger some of the asteroids or comets pose, and methods of mitigation are being researched.

As can be seen from the picture above,  Near-Earth Asteroid classification is dependent on the orbital path taken by these bodies. The blue orbital path is that of Earth whilst the red is that of Mars. The main groups are shown here but there are other smaller groups too. The one group, Atiras (not shown) have their entire orbital path nearer the Sun than that of Earth’s

There are a few countries currently scanning for NEOs in an effort called Spaceguard.  The idea is to locate and track every NEO that is at least one kilometre wide as these objects would be globally catastrophic if they were to hit Earth.  But smaller NEOs are also being located and tracked as any impact would be damaging, the amount of damage would depend on the size of the object and on its trajectory.

Due to their Earth-like orbits and low surface gravity, some NEOs can be approached by spacecraft with a relatively low energy (and thus fuel) expenditure. Since the 1970s, both manned and unmanned missions have been proposed. As of January 2018, three near-Earth asteroids (NEA) have been visited by spacecraft, and two more are en route for future rendezvous. Plans to mine NEAs commercially have been picked up by a private company.

The Astronomy Society of Harare has a presentation at 6pm on the second Wednesday of every month (except for December) at the Lecture Theatre at St. Georges College and,  you’re all invited. You don’t need to be a boffin or own a telescope to come along to these meetings – you just need an interest! If you have any questions regarding the Astronomy Society or about this article, kindly contact Tony Alegria on: tonyalegria47@gmail.com

The Celestial Sphere and Planets