Down under it might be called Vachellia karroo, but I will stick to the name “Acacia.” After all, the first Acacia specimen (Acacia nilotica) was described by Carl Linnaeus in 1773 in Africa. Its common names are Sweet Thorn, Isinga (Ndebele), and Munenje (Shona). This tree is part of the Fabaceae family, which is a very large group. Therefore, it has been subdivided into Mimosoideae, Papilionoideae and Caesalpinoideae. In the “Field Guide to the Acacias of Zimbabwe” (Jonathan Timberlake et al.) 43 acacias are described. This tree is a part of the Mimosoideae family.

Acacia karroo is possibly the most widespread, and the showiest of all the acacias when in flower. It is a small to medium-sized tree, mostly single-stemmed with a rounded crown. 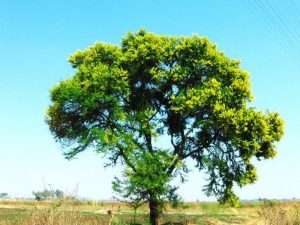 he bark on is coarse and dark-grey to black, with a tinge of red from the under-bark. The leaves are bipinnate, and very green and shiny. The thorns, which are actually modified stipules, are paired at the nodes. The inflorescence, from December to March, is spectacular. What we call the “flower” is in fact an aggregate of tiny individual petal-less tiny flowers. They are sweet scented and occur in a profusion of aggregate globose “flowers.” This Acacia is pollinated by insects. 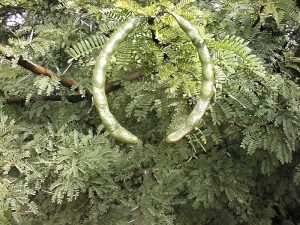 The pods are slender, sickle-shaped beans, and somewhat constricted between individual seeds. The pods and the foliage are relished by wild animals (black rhino, giraffe, eland, kudu, sable, and impala) and by livestock.

The tree produces a sweet resin that is very palatable and cancompete with the gum of Acacia senegal. Once upon a time the gum was exported as “Gomme du Cap”. A local NGO, Bio-Innnovation Zimbabwe, is presently trying to get it recognised asan acceptable alternative to Gum Arabic, which is predominantly produced in Somalia, and is globally sought-after for use in the confectionary industry. 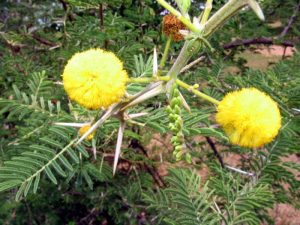 The tree could easily be used in agro-forestry in the dryer parts of this country, combined with beehives and the production of fodder. The seeds germinate easily if soaked in hot water or scarified some other way, and transplant well in a wide variety of soils. It is both drought and frost resistant. Another interesting feature of Acacia karroo (and other Leguminosae) is that they fix atmospheric nitrogen. As a pioneer in soil reclamation it has great potential.

The tree is relatively fast growing (around one metre a year) but rarely exceeds 35 years of age. The wood is heavy (800 to 900 kg per cubic metre) and burns well. The wood is unfortunately not very durable being very prone to borer attacks. The tree coppices readily and makes a good charcoal. 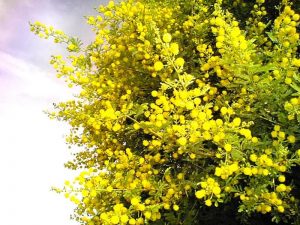 The bark is useful in tanning, giving leather a reddish-brown colour, and the inner bark makes good ropes. The tree also has medicinal uses. Of interest to our more senior readers, the seeds are chewed as an aphrodisiac and the bark and roots are used for various digestive system ailments.

B.Goldsmith and D.T. Carter. The Indigenous Timbers of Zimbabwe.

Nico Smit. Guide to the Acacias of South-Africa.

Fanie & Julye-Ann Venter. Making the most of Indigenous trees.