The current checklist for Zimbabwe’s birds lists 674 species, and a total of 20 sites have been identified as Important Bird (and Biodiversity) Areas (IBAs) covering 30,050 km² or 7.7% of the national land surface area. 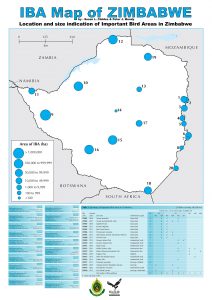 The first eight sites cover the most important biodiversity areas (for restricted-range and/or endemic birds, mammals, reptiles, amphibians, plants and insects) in the Eastern Highlands. The remaining 12 were chosen for the presence of bird species of global conservation concern, for supporting significant congregations of one or more bird species, or for holding a good selection of species that are characteristic of a particular biome.

The Eastern Highlands contain globally threatened and restricted-range birds, such as Blue Swallow, Robert`s Warbler, Chirinda Apalis, and Swynnerton`s Robin. Nyanga was split into mountain and lowland sites (IBAs ZW001 and ZW002 respectively) on the basis of altitude, vegetation, and land-use. Stapleford Forest (ZW003) was chosen on historical data and anecdotal evidence, and was successfully surveyed for indicator species in 2017. The Bvumba Highlands (ZW004) are one of the best documented bird areas in the country and contain a wide range of species restricted to the Afrotropical Highlands biome. Banti Forest Reserve (ZW005) was also chosen on historical grounds (collection data) and was briefly surveyed for this inventory. Its isolation, botanical importance and past (and present) avian importance made it a valid inclusion. The Chimanimani Mountains (ZW006) are the area of greatest plant endemism in Zimbabwe, and home to an endemic subspecies of Bokmakierie. Haroni-Rusitu (ZW007) is well known amongst birdwatchers and represents one of the few areas of lowland forest (East African Coast biome) in Zimbabwe. It also encompasses a wide range of altitudes and habitats – an important factor in protecting forest birds’ summer and winter grounds. Two globally near-threatened species, Southern Banded Snake Eagle and Blue-throated Sunbird, occur here. Chirinda Forest (ZW008) represents the southernmost part of the highland chain. It is the type-locality for Swynnerton`s Robin and nine subspecies of birds, as well as for several rare mammals, reptiles and amphibians.

Hwange National Park (IBA ZW009) contains a system of about 40,000 shallow pans that attract a wide variety of waterbirds. While individual pans are too small to carry large numbers of birds, the total for the whole park is significant. Hwange is also important for its raptors, vultures, and other critically endangered, threatened, or vulnerable species such as the Yellow-billed Oxpecker and Southern Ground Hornbill. It contains three species representing the eastern extremity of the Kalahari–Highveld biome, but most of its biome-restricted birds belong to the Zambezian biome.

Chizarira (IBA ZW010) is well known for its raptor populations, and the globally threatened Taita Falcon breeds there. The avifauna is Zambezian, with some lowland forest species in the gorges and ravines.

Batoka Gorge (ZW011) is a major breeding site for cliff-nesting raptors and used to contain one of the largest populations of Taita Falcon. The gorge also holds 35 other raptor species, Black Stork, and large numbers of Rock Pratincole. The gorge is under imminent threat from flooding by a hydroelectric dam.

The Middle Zambezi valley (ZW012) contains significant numbers of Lilian`s Lovebirds, a rich variety of waterbirds (90 species) and 52 species of raptors, and is the only known locality for Shelley`s Sunbird in Zimbabwe. 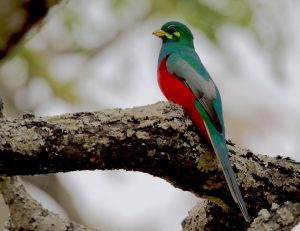 support 22 species of the Zambezian biome. The lakes can host over 100 species of waterbirds, totalling up to 27,000 individuals. Wabai Hill (ZW015) used to be the daily roost-site for up to 150 Cape Vultures. (This species no longer roosts at this site owing to the resettlement programme and subsequent land use change.) The surrounding grasslands are habitats for Kori Bustard, Wattled Crane (rarely), Lesser Kestrel, and Pallid Harrier.

The Matobo Hills (IBA ZW016) are well known for their high density and species richness of raptors, including at least 75 pairs of Verreaux`s Eagle. The hills support a considerable population of Boulder Chat and other Zambezian-biome species.

The Driefontein grasslands (ZW017) were chosen for their significant breeding population of Wattled Crane. The Limpopo-Mwenezi flood-plains and pans (ZW018) are sites for the restricted-range species Lemon-breasted Canary and the near threatened Blue-throated Sunbird.

The Mavuradonha mountains (ZW019) represent miombo woodland along the eastern Zambezi Escarpment. The site was included as being a good example of Zambezian-biome habitat (holding 13 characteristic species), for its raptors, and because it is at the southern extremity of the range of some Brachystegia species.

The Save-Runde junction (ZW020) has affinities with the East African Coast biome, holding four of the characteristic species. Three Zambezian-biome species are found very marginally within Zimbabwe, only at Kazungula – Coppery-tailed Coucal, Chirping Cisticola and Brown Firefinch – making this a nationally significant site.

BirdLife Zimbabwe Mashonaland Branch organizes regular bird walks for its members and non-members free of charge (however there may be entry fees e.g. National Parks or a tip required depending on the location). For further information please contact Tony Alegria, tonyalegria47@gmail.com, 0772 438697, 24 2 490375