This beautiful, buff to brown-coloured owl is of medium size and has a heart-shaped face and small ear tufts which are not always visible. Its eyes are yellow with huge, black irises that seem to take up so much of their face, and heavy, lashed lids which appear to be blue/light grey.
The bill is grey with a black tip. They stand 31 to 38 centimetres high, with a wingspan of 28 to 38 centimetres, a tail length of between 13 and 18 centimetres and a weight of
225 – 485g. Its small size does not stop this owl being quite aggressive, especially near its nest and will feign injury to distract predators.

Marsh owls roost on the ground; nests can be found in a hollow within a patch of tall grass or weeds, often beside a bush and with an ‘entrance tunnel’ from one side. Vegetation is often pulled over by the female to form a canopy.

The depression itself is lined with some dry leaves to form a pad. The Marsh owl is a monogamous bird which means that the bird finds, and breeds with one partner for the rest of its life. Two to six eggs are laid but normally three at intervals of about two days. 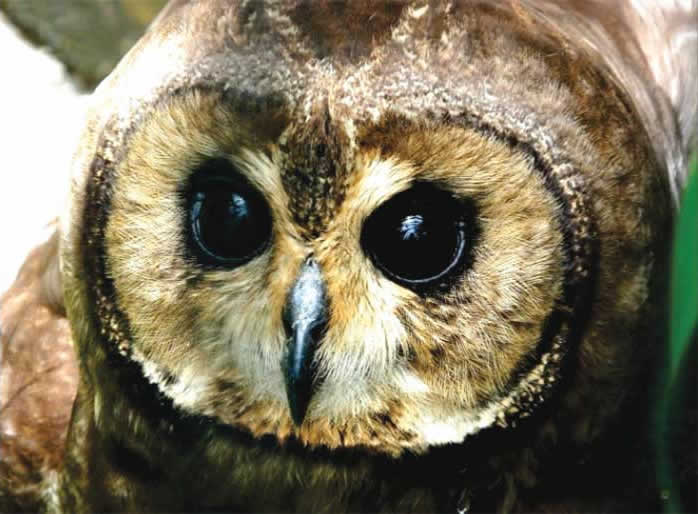 The female incubates them alone as soon as they are laid. Incubation period is 27-28 days for each egg, and during this time she is fed by the male. The young Marsh owls leave the nest at around 18 days old while still downy, and scatter into the surrounding vegetation. During this time, the parents locate their young by their calls and trampling movements in order to feed them. Fledging is at 29-35 days old, and they are fully-feathered at 70 days. Both parents care for them for some time before they become independent. The average lifespan of an African Marsh owl is 15 years.

Hunting both during the day and at night, the Marsh owl uses its acute eyesight to spot prey. This includes mice, voles, rats, shrews, young hares, bats, birds up to the size of small ducks, doves, frogs, lizards, scorpions, beetles, grasshoppers, etc.

Threat: Throughout the species’ range, Marsh owl foraging and nesting habitat may be altered through overgrazing by livestock, drainage of wetlands, grassland fires and habitat degradation and from human encroachment. The Marsh owl is believed to be common throughout much of its extensive range, with no evidence of a decline.
Ref: The Owl Page and Wikipedia.

What are Zimbabwe`s Important Bird Areas?