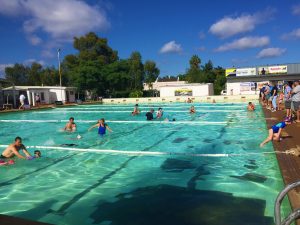 We’ve all heard of Mount Pleasant swimming pool as being great to swim in, well run and well maintained. Built in 1967 it has imperial sizing, 33m long by 22.9m wide. However, its infrastructure has now aged and needs constant care and attention. There is a diving pool with a diving structure which is a copy of one in London that has a preservation order; ours needs major work to preserve it.

Maintenance of the pool is the responsibility of Triathlon Zimbabwe who have an agreement with Harare City Council (HCC) to run their triathlon events at the pool in return for buying chemicals and doing any repairs required. Unfortunately, Triathlon Zimbabwe is doing more capital jobs which are not really part of the agreement with HCC due to shortage of funds at the Council.  Due to its age, the pool requires constant maintenance and in the past, many companies have been involved in doing just that – Ed and Bill Finaughty from KW Blasting, Ian Duncan from RS Diesels and Shaun Sheldon from Electrosales to mention a few. Without their sponsorship of maintenance work the pool would be in a sorry state. To do repairs, all I could see were problems and challenges.

However, I had a dream! You’ve heard that before – to repair the tiles at the pool to make it safe for use. The cost of repairs could not be covered by Triathlon Zimbabwe, who just about breakeven every year. Earlier this year, with the pool full of water I estimated the approximate number of tiles required at 40-45m². In March 2018, 150 x 150 mm white tiles, nearly the correct size, were found in Harare and a loan for $925 was taken out in order to purchase 50m² of them. I started a fundraising appeal asking for sponsorship for laid tiles at $30-35 per m², which turned out to be too low. The appeal bought in donations and that was great. Unfortunately, the funds then dried up and as costs went up I had nightmares – how would I pay back the loan, never mind pay for tilers and other materials. I approached companies for donations of materials which Artisan and Lafarge both pledged.

We drained the pool early May and started chipping out the broken tiles and into the base cement so new ones could be cemented in. After two weeks, the tilers walked off the job. We had both underestimated the time and cost it would take to chip out. A new tiler was subsequently found, a new rate agreed upon and we were able to recommence operations.

The next hiccup was discovering more loose tiles, so I started tapping on all of the tiles. Many sounded hollow indicating that they had lost their adhesion over time and were just waiting to come loose. With the bottom of the pool covering an area of 33m x 22.9m and tile size of 150 x 150 mm, this translated into about 33 000 tiles on the bottom alone; a hellava lot of tapping! The amount of tiles required kept rising as the tilers chipped away finding more lose tiles, so I purchased another 20 m² and then another 20m².

The next challenge was that I had planned an overseas trip and the job was nowhere near complete by the time I was due to leave. Luckily, Rick Fulton willingly stepped in to oversee the finishing of the project. Yet another 10m² of tiles was required thus bringing the total to double the original estimate! The new tilers were doing a great job and the laid tiles looking really good. Donations of materials were really helping to keep the costs down.  Lafarge donated the adhesive for laying the tiles and Artisan donated the special cement paint for the lane end turnaround blocks. The final job of acid washing all the tiles had the amazing effect of bringing the original tiles back to looking nearly white again.

The pool part of repairs has been completed and it looks fantastic. Although the budgeted costs over ran, Triathlon Zimbabwe chipped in with funds to finish the pool, made available from their 2017-18 season surplus. There are several other jobs I still wanted to do as part of the project; repair the concrete driveway, redo the cement floors in the changing rooms and repair and repaint the wooden benches. These will have to wait. Oh, and in future, repair the diving board structure and even re-tile the whole pool!

Finally I would like to thank all the people who assisted with this project, the people who donated money without which none of this would have happened, the donors of materials, the tilers who did a great job, HCC personnel at the pool and anyone else I have forgotten to include. Thanks to everyone. 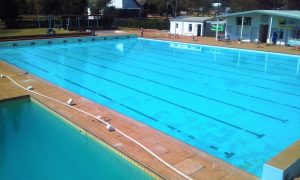 Teaching Young and Old to Sail