This year, World Environment Day was held on June 5th 2018 with the theme of “Beat 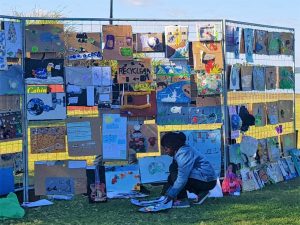 Plastic Pollution.” In Zimbabwe, to help raise awareness about the need protection of the environment through art, the “Death by Plastic” project was launched. This was the fifth installment in a series of initiatives; “AMBIENTE” Art and the Environment, which was launched in 2014 by His Excellency Enrico De Agostini, Ambassador of Italy to Zimbabwe.

The Death by Plastic Project was a collaboration with the Embassy of Italy, Miracle Missions Clean and Green, Birdlife Zimbabwe, EnviroExperts Africa, Lynde Francis Trust and Mukuvisi Woodlands. The competition invited children to design a collage using plastic waste from their homes, school and communities to illustrate the “Death by Plastic” theme and/or possible solutions to this devastating problem. 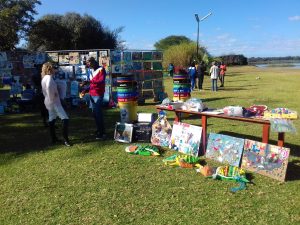 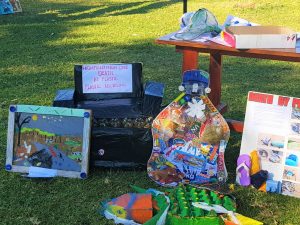 Hundreds of innovative entries poured in from around the country and showcased the talents of many a young environmental warrior. The Grand Finale Prize Giving was held on June 15th out at Kuimba Shiri Birdpark with over 450 children, teachers and invited guests in attendance. 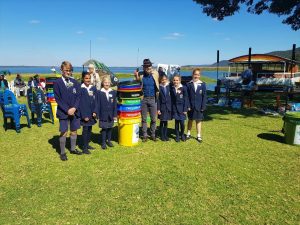 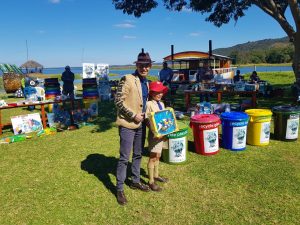 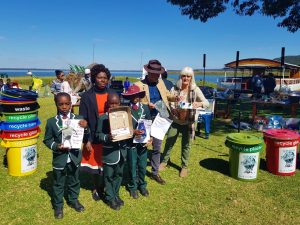 In addition to these individual prize winners, the judges decided to award some very special group prizes. The first of these is to Hellenic Primary School for embracing this year’s theme on a massive scale by setting the “Death by Plastic” competition as a holiday
project for the whole school! They received a set of recycling dustbins which are hoped to help the school to continue raising awareness about the importance of recycling our waste in order to minimise pollution in our schools, our homes and around our Nation.

A second set of recycling dustbins was awarded to Bryden School out in Chegutu in recognition of their success in awakening an environmental awareness not only around their school but also in the wider Chegutu community. A third set of dustbins went out to a group who call themselves the “Waste Warriors” from Dangwe Arts. Lynde Francis Trust work with these children from Chitungwiza with an artist named Toggy. They raise

awareness in their community of the importance of recycling waste.

Another important element of the “Death by Plastic” Project was to get the children thinking about possible solutions to the plastic pollution problem. The judges were so impressed by the recycled plastic ideas proposed by the boys and girls of Simudzai Primary School that they won the prize of a tour of the Tregers Recycling Factory kindly donated by Jeff Carder of Tregers. There they will be able to see for themselves how old milk cartons,bottle tops etc are recycled and made into brand new items.

That next special prizes – two sets of recycled plastic chairs were awarded to Donnybrook School and Highfield High One. Both of these groups submitted some wonderful up-cycling ideas as solutions to the plastic pollution problem such as a fabulous armchair. The final prize for the day went to the four members of the Chizungu Primary Environmental Art Club in Epworth.

As Captain Planet said, “The power is YOURS!” 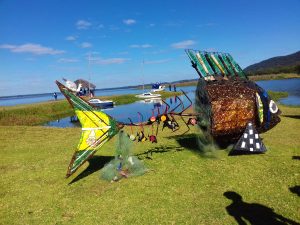 The famous fish sculpture which traveled around Harare has found its final resting place on the shores of Lake Chivero where it will be a reminder of the danger of plastic pollution in our lakes, rivers and streams. Why not make a trip out there with the kids to see it?

Saying NO to Single-Use Plastics