Last year we had this news from The Guardian: “A house-size asteroid will give Earth a near-miss on Thursday 12th October 2017, giving experts a rare chance to rehearse for a real-life strike threat as it passes inside the moon’s orbit. Dubbed 2012 TC4, the space rock will shave past at an altitude of less than 44,000 km (27,300 miles) – just above the 36,000 km altitude at which hundreds of geosynchronous satellites orbit the Earth. That represents about an eighth of the distance between the Earth and the moon.”

Now that was really, really close! If it had hit Earth, the effects would be disastrous! But what is an asteroid? Here is a definition from Cybersky: 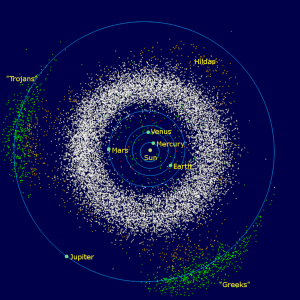 A relatively small, rocky body that orbits the Sun just as planets do. Asteroids are thought to be leftover planetesimals, similar to the bodies that collided billions of years ago to form the Solar System’s rocky inner planets and the cores of its outer gas giants. Asteroids are larger than meteoroids but smaller than planets. Most are found in the region between the orbits of Mars and Jupiter known as the asteroid belt. Asteroids are also known as minor planets and the larger ones are sometimes called planetoids.

Asteroids are minor planets by definition because anything that circles the Sun is a planet, and anything that circles a planet is a moon. And here size does matter – a minor planet is much smaller than a planet and is more than one metre in width, any rock less than a metre is termed a meteoroid. Asteroids are named after their compositions and are generally made of rock, metals and other elements. The size of asteroids vary greatly, some reaching as much as 1000 km across.

The Asteroid belt consists of millions of asteroids, many resemble potatoes in shape. It is thought that whilst the Solar system was being formed these bits and pieces failed to make up another planet which would end up lying between Mars and Jupiter. However there are many more asteroids out there besides thosein the asteroid belt. Trojan asteroids share an orbit with a largerplanet in two special places, known as Lagrange points, where the gravitational pull of the sun and the planet are balanced. Jupiter Trojans are the most numerous, boasting nearly as high a population as the main asteroid belt, but Neptune, Mars and Earth also have Trojan asteroids. There are also asteroids beyond Pluto.

The Astronomy Society of Harare has a presentation at 6pm on the second Wednesday of every month (except for December) at the Lecture Theatre at St. Georges College. You don’t need to be a boffin or own a telescope to come along to these meetings – you just need an interest! Everyone is welcome. If you have any questions regarding the Astronomy Society or about this article, kindly contact Tony Alegria on: tonyalegria47@gmail.com